I turned eighteen in June, but no one had ever told me how voter's registration works.  I thought, well, truth be told, I thought they'd just send me my card in the mail.
That was until the day before yesterday, at lunch, when I said, all of a sudden...
"Hey!  Am I registered to vote?"
It started a frenzied panic.... that day was the last day for registering.  We hurried to the nearest courthouse and I filled out the form.
I will vote, by a miracle.... Amazing!! 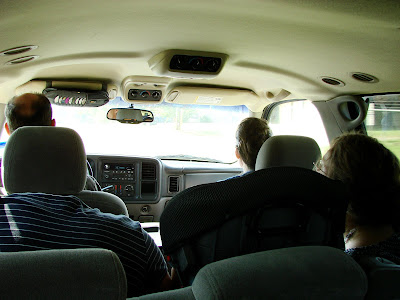 We had been taking a Sunday drive only the week before, the wheels of our blue Suburban rolling swiftly over the asphalt road beneath us, when a bump, bump under us made Dad look up.
"That was a McCain/Palin sign."  He said.
Our voices filled the car in a rush of excitement.  "What?  Go get it!"
So, we turned around and went back.  Dad pulled over and darted to the middle of the road where the small, blue and white sign lay waiting.  He picked it up and slipped it into the back of the Suburban, hardly marred. 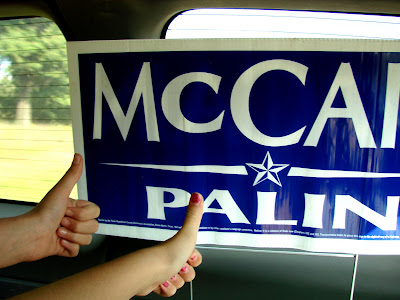 Are you voting on voting day?  Please do.  I don't like saying unpleasant things about people, or spreading unpleasant gossip about them, but despite the ugliness of many things said about the democratic nominee, Barak Obama, many of them have a great possibility of being true.
Besides that, the evidence speaks for itself.  I know most of my readers are conservatives.  But are you all going to go and put down your mark to put John McCain into office as our president?
I have seen many conservatives voicing their dislike for Senator McCain's running mate, Sarah Palin, based on the belief that, as a woman, she is abandoning her children and her duties as wife and mother in running beside the Senator, in doing something that does take away from her ability to achieve motherhood and wifehood.  Perhaps it does change her ability to do that, but it does not make it impossible!  I believe, from what I see, that Sarah Palin is doing what God gave her to do, and doing it in the best way she knows how.  Please, please do not demerit her if you do not agree with her way of doing it.
I know how strongly people feel about this, so I shall not attempt to dissaude them.  But I will beg, please, please, vote.  Do not hold back a vote that will put someone in office who can aid our country, and who believes in God. Isn't that the greatest thing of all?  Withholding your vote will do more ill than good.
Please, vote for John McCain and Sarah Palin, if only so that Barak Obama does not gain the chance to control our country.
Emma
Note:  Carla and Tiffany, we are working on the Six Random Things.:)
Posted by Emma Pearl at 9:16 AM

I'm kind of a "ghost reader" of y'all's blog (and very much enjoy reading and seeing the photos on here!), but I thought I'd finally comment. :-D

I agree COMPLETELY with what y'all have said about McCain/Palin. Unfortunately, I was SUPPOSED to vote this year but I didn't register in time. :( *sigh* Ah well. But if I was able to vote it would definitely be for McCain!! I'm so glad (and encouraged!) to see that my family is not the only "conservative" family voting for McCain and Palin!

Let me second everything you've said!

Praying for the future of our country...

I agree with you girls!

I find so many conservative Christians have decided to either withhold their votes or vote for a candidate that hasn't even the slightest chance of winning...such a shame! I only wish they could see they are essentially wasting their vote!

I'll be voting this year for McCain/Palin, too!

Love you both so much!
Emily

The year I turn 18 was the first year that President Bush ran for office. I had registered to vote when I got my driver's license, but when I got to the voting place, they said that I wasn't registered to vote. I was so upset I cried. (Not in front of anyone, of course) Since then I have taken my responsibility to vote very seriously. Our whole family does. We talk about it together and go and vote together. It's a regular family outting.

All that to say that I will definitely be voting!

btw-Emma, for some reason Sensibility won't come up on my computer so I haven't been able to read the U2U, but I will as soon as I can get on.

Well, I guess I'm in the minority here - but I ought to be used to it by now! I've been in the minority polictically for years. :) Believe me, I'm not looking forward to an Obama presidency, but I can't in good conscience vote for John McCain. I have serious issues with many of his positions. And this doesn't have anything to do with Sarah Palin for me, either. I don't think her vice presidency would have any tangible effect on McCain policy. Even if the best of everything that's been said/written/believed about Palin is absolutely true, I don't find her a strong enough reason to vote for John McCain. I will probably vote for the Constitution Party candidate, Pastor Chuck Baldwin, if he's on the ballot in my state.

Please don't take offense at any of this! :) I'm certainly not trying to offend or criticise anybody, just explaining the thought behind my decision.

Emma, I am to young to vote but I sure do know right from wrong, as was written on a teenage girl's sign at the McCain/Palin Straight Talk Town Hall I recently attended in Waukesha, WI.How true this is!

Im only 16 but I would definitely vote for McCain too! Even though I am Canadian (something I rarely admitt to on my blog), I am very up to date with American politics and think that Obama would be a terrible president. So, I agree with you, McCain is the way to go!

Just letting you know that I tagged you! ;)

I'm with you girls! I am voting for the McCain/Palin ticket. This Friday I am going to hear Sarah Palin speak at a rally near my house with my family. I am so excited! For I have never been to a rally before.